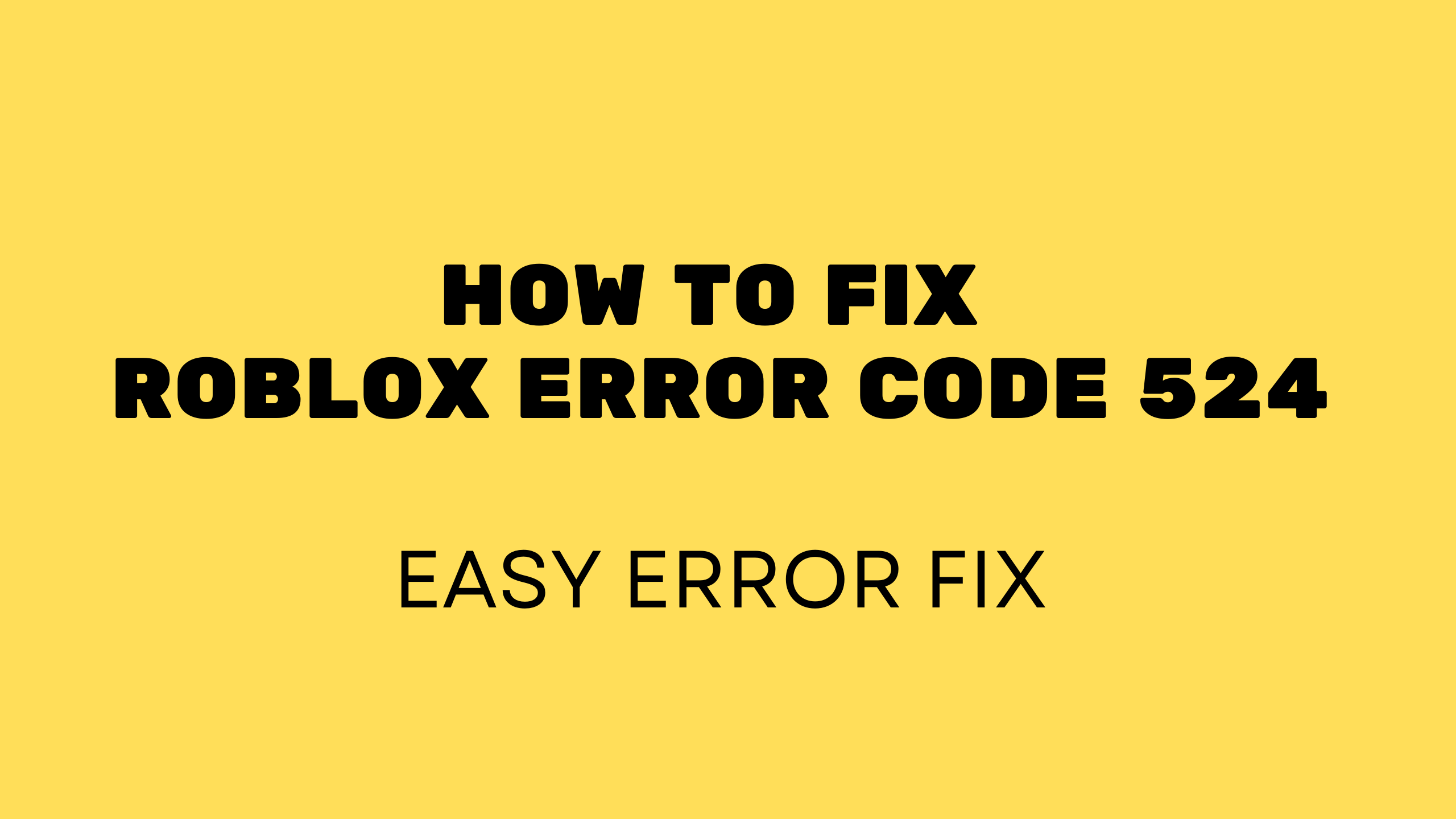 In this post, we will discuss how to fix Roblox Error Code 524. Roblox is a gaming platform globally where people can interact through games.  In 2006, David Baszucki and Erik Cassel were launched profoundly with the name of Roblox Corporation. Initially, it was developed and used by a few players but after 2010, it got fame drastically and many are using this. It has both free and paid versions and it also supports single-player games and multiplayer games.

It also allows its users to create their games and another interesting fact is a player can play the games created by other players. Besides all these highlights the Roblox online game platform also causes a few errors while playing different games at different levels. Among all the errors and their codes, let’s see the record 524, what is the reason behind it and how to fix this error.

Cause of Roblox Error Code 524

The message itself seems to be that the server is not allowing you to enter. It is not providing authority to play the game.

In detail, when the user needs to enter a VIP game, then these authorization errors May occur. Because the major reason behind this error code 524 is the VIP games or the games created by VIP may have given authorization to very few players. In that case, if the new player doesn’t have the authorization to enter the VIP game then it occurs. Though it is a bit of a frustrating issue, it is very easy to fix it. Also, we have three different ways to fix the error code 524. Let’s see them in detail.

Another notable thing is that internet connectivity is not at all an issue for getting this error code 524. It is just because of the authority given by game creators. It is the best group to troubleshoot after determining the cars of any error.

How to fix Roblox Error Code 524

We have three different ways to fix the Roblox Error Code 524 for any kind of cause. By using these three methods, the new player can get authentication to enter the VIP game. And no user needs to bother about the internet connectivity issues.

It is very simple and straightforward to enter the VIP game if the user gets a direct invitation from a friend who already exists on the VIP server. Getting an invitation is also not a tough task; the user needs to follow a few simple steps to get invited by the VIP members.

That’s it. By following these simple steps, new users also directly get an invitation to enter the VIP game and can enjoy their game uninterruptedly.

If the direct invitation option doesn’t work for the user or even though the system is showing the same error message after getting the invitation, then the user needs to choose the second way to fix the error code. It is so simple. The user needs to just reinstall the Roblox.

Steps for the installation of Roblox.

The most important and trustworthy method to troubleshoot the error code 524 East is to begin a new server of any new game. Here a user requires VPN to begin a new server. Using VPN indicates that it is a private server that is authenticated to the user itself. He may invite other players according to his wish. He has the authority to allow the players or to restrict the players.

In this way, the users can begin a new version that is completely authenticated to the user itself. Almost 3/4 of the players got connected with this technique.

Another important thing is that the users need to try each way to fix the error code 524 a couple of times. Because due to network issues or server traffic or any other reason, it may not be able to fix the error instantly. So if the user tries multiple times, then the server can give access through any of the above-mentioned methods.

These are the few things every Roblox player needs to check with their device. Also, follow all the guidelines mentioned by the Roblox app. By using any of the above-mentioned methods, the user can fix the error code 524 easily and can enjoy the desired VIP game with his friends. Along with error code 524, every error has multiple ways to fix it suggested by the Roblox app so all the players can spend their leisure time and get an amazing gaming experience.